Trefadder was the first in Norway to commercially scale "climate forests". 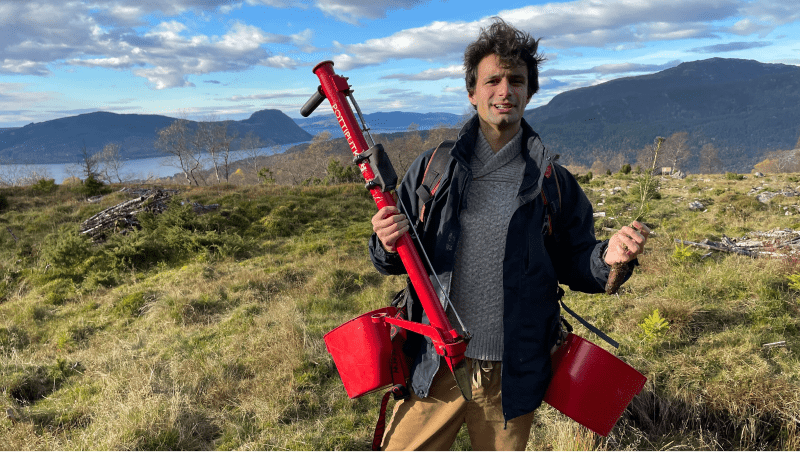 In 2022, Trefadder planted 700,000 trees, 300,000 of them in the Rogaland region. The same location you see in the picture above, Hagalid Gård, where our CEO Janek visited in late October to help plant the last trees of the season!

These trees will grow and sequester carbon for at least 60-80 years. This makes their carbon credits some of the safest investments you can make as we move into a Net Zero world.

These forests are solely financed by carbon credit sales and are designed to sequester carbon dioxide and help reduce climate change. Their afforestation project is built upon rigorous academic research, partnerships with local landowners along the Norwegian coastline, and the stable political framework and environmentally focused society of Norway.

Trefadder plants a variety of local Norwegian tree species such as spruce, pine, birch and coniferous depending on the site. They plant only by hand, only in areas where there is currently little carbon sequestration and left unused for at least 10 years (i.e. no alternative use as farmland). This allows them to have the biggest impact on climate change, as well as ensuring that their trees do not come into conflict with nature, cultural monuments or conservation areas.

Climate forests are only established in areas where the forest owner has the ability to manage and care for the forest. The trees are registered to the property, which means that even if the property changes hands, there is secure legal protection (easement) for the physical trees. When a forest is cut down in Norway, it must be replanted, which means that a clear-cut forest is not viable to become a climate forest.

The amount of carbon sequestered is estimated at 80 tCO2 per 1000 sqm (decare). Everything in excess of 60 tCO2 per decare is set aside as a risk margin.

The carbon sequestration effect is based upon research by the Norwegian Ministry of Climate and the Environment (Klima og Miljødepartementet), the Norwegian Institute of Bioeconomy Research (NIBIO), and the Norwegian University of Life Sciences (NMBU).

None of the major standards in certifying carbon projects - such as Verra or Gold Standard - list any nature-based sequestration projects in Northern Europe. This is because their methodologies are not suited to the local landscape and are typically tailored to more tropical locations.

It starts with ordering the correct tree types from the “plant nursery”. Once it’s time to sow, Trefadder requires that forest owners plant according to PEFC (Programme for the Endorsement of Forest Certification) or FSC (Forest Stewardship Council) standards. For example, the Norwegian PEFC Forest Standard contains 27 requirements relating to how the forest owner must manage and operate the forest. Some requirements are clarifications of the statutory duties under Norwegian law, and other requirements go above and beyond current legislation.

A third-party checks that trees are planted in accordance with the agreement during the same or in the next season. Once Trefadder approves the area, it is added to their inventory / customer map, which is recorded in their financial statements and audited. The third-party varies according to available local expertise, but can be RS Skog in Rogaland or Skogselskapet (The Norwegian Forest Society) in Nordland.

A client of ESG-NRG, Peak Group, a Bergen-based shipowner and logistics company, was interested in starting a carbon removal conversation with a wind turbine producer. However, they wanted to a support project with atmospheric impact, longevity, and - ideally speaking - based in Norway.

That’s when ESG-NRG reached out to Trefadder to learn more about their operation and we were impressed by the results they had achieved. As was Peak Group and their client, who required the transportation of windmill parts from Motril, Spain to Rostock, Germany. Renewable power just became even more environmentally sustainable!

Now we’ve made Trefadder’s carbon removal credits accessible to you directly through the Marine Offset Platform.

So you can keep delivering, Net Zero!